On Monday, August 29, Aaron Judge of the New York Yankees hit his 50th home run of the season. He leads the MLB in home runs this year as the Yankees pursue the World Series pennant.

The post-game interview went like this, "It's just another number,'' said Judge, who was intentionally walked twice Monday before going deep. "It's great, but I'm kind of upset we lost. It's a close game we could've won.''

"I'm not downplaying it. I just don't like talking numbers," Judge said. "We can talk about numbers and all that kind of stuff when the season's over with, we can review it, but for right now most important thing for me is getting some wins."

Undistracted vision on a goal. Individual achievement downplayed for the sake of a greater goal.

Does the Bible talk about having focus? Who is our "team" anyway? Can a Christian be distracted by individual accomplishments?

Those are all great questions. Let's just take the first one in this article and then focus on the next two in upcoming e-news articles.

The Hebrew author writes in chapter 12, "...let us run with perseverance the race marked out for us, fixing our eyes on Jesus, the pioneer and perfecter of faith."

Our focus should not be on a doctrine, a mission, or a program, but on a person - Jesus. Jesus holds the pass into heaven. Jesus can hook us up with the Father. Jesus is the booster shot we all need. Jesus is the best investment you will ever make.

Keeping our focus on Jesus...doesn't that bring to your mind another New Testament story where someone failed to keep their eyes on Jesus?

When Peter and the other apostles saw a figure walking on the water in the middle of the night, they responded as you would expect by screaming, "It's a ghost!" Jesus identified himself, and Peter, the 'leap-before-you-look-disciple', said, "Oh yeah? If it's really you, tell me to come to you on the water."

Peter successfully walked on the water until he took his eyes off Jesus and looked around at the wind and waves. He began to sink. When his focus was lost, so was his foundation.

Paul said it this way in Philippians 3:13,14, "Brothers and sisters, I do not consider myself yet to have taken hold of it. But one thing I do; Forgetting what is behind and straining toward what is ahead, I press on toward the goal to win the prize for which God had called me heavenward in Christ Jesus."

Just last night, Aaron Judge hit home runs numbers 55 and 56 against their rival Boston Red Sox to lead his team to a 7-6 win in 10 innings.

"I'm sure, deep down, he's aware of what's going on. But when your priorities are right, and around team, and around leading this team and being the guy, he keeps it simple," Yankee's Manager Aaron Boone said of Judge's focus always being team-first.

Judge's focus is on his team: May our focus be on Jesus!

Focus on the Team - Part 3 - Distractions

This month we are wrapping up "Focus on the Team" with part 3, Distractions. We're going to be talking about distractions that... 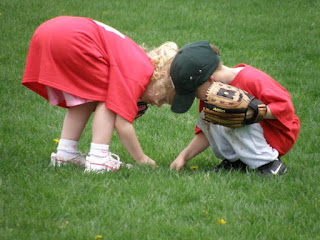